What Assessments Can Tell us About Entrepreneurs Bill Bonnstetter is the founder of TTI Success Insights, the world’s leading source for research-based, validated assessment tools via their own patented solutions and products. TTI is the administrator and R&D firm behind the assessments Buy Then Build provides through our online courses and mentor programs. Below we’ve combined two articles originally published at Harvard Business Review, New Research: The Skills that make an Entrepreneur and The Skills Most Entrepreneurs Lack.

New Research: The Skills That Make an Entrepreneur

Entrepreneurial-minded people (and the ideas they generate) are extremely valuable to an organization. At our research firm, we recently conducted a multi-variable analysis of a group of serial entrepreneurs and identified five personal skills that clearly make them unique. “Personal skills” — often classified as “soft skills” — develop slowly over time, and we used them to help identify what job-related activities a person has developed. We primarily looked at people who started multiple businesses and experienced both success and failure.

After assessing the subjects on their personal skills and comparing their performance against a control group, we found a certain set of skills were the most predictive of an entrepreneurial mindset. In fact, by examining these five distinct personal skills alone, we were able to predict with over 90 percent accuracy people who would become serial entrepreneurs. 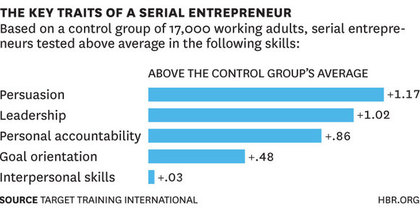 The quality serial entrepreneurs displayed above others was persuasion, or the ability to convince others to change the way they think, believe or behave. Persuasion for this study was defined as the ability to persuade others to join the mission. In the study, this was uncovered by ranking on a scale of 1 to 6 prompts such as: “I have been recognized for my ability to get others to say yes,” or “I have a reputation for delivering powerful presentations.” Unquestionably entrepreneurs need to excel at persuasion, whether to recruit a team or get buy-in from investors and stakeholders.

Perhaps not surprisingly, leadership is also one of the five areas where entrepreneurs excelled. In this study, good leaders were defined as having a compelling vision for the future, i.e., surveyors who highly ranked prompts such as: “In the past, people have taken risks to support my vision, mission or goals,” or “I have been criticized for being too competitive.” Serial entrepreneurs ranked both of these prompts highly. For people with an entrepreneurial mind-set, their strength of vision is usually tied to a product or service that provides solutions to challenges, even when the general public is not aware the challenge exists.

Goal orientation is another critical skill for entrepreneurial-minded people. In the study, goal orientation was defined as energetically focusing efforts on meeting a goal, mission, or objective (which closely paired with leadership, as it is described above). More entrepreneurs generally agreed with the statements: “I am known for overcoming significant obstacles to reach goals,” or “I am most productive when working closely with others to achieve goals.” As mentioned above, it’s important that entrepreneurs have a strong sense of what their goal is, because their product or service depends on it. Identifying and advocating for the goal allows them to influence others and gain their support.

The final identifying skill is a mastery of interpersonal skills, the glue that holds the other four skills together. They include effectively communicating, building rapport, and relating well to all people, from all backgrounds and communication styles. In the study, people who excelled here agreed with: “My ability to get along with people has been a key to my greatest accomplishments,” or “I am known for my ability to calm people who are emotionally upset.” Without interpersonal skills, an entrepreneur would be limited to relating only to those who share their exact communication style, thus restricting her ability to convey her vision and goals.

In contrast to ephemeral notions that entrepreneurial success comes as a result of perfect timing meeting brilliant ideas in a cosmic moment of alignment, this research indicates entrepreneurially successful people are successful for a reason — that many of them highly display certain personal skills. And while this research identifies these skills, it should be pointed out these five attributes are not inherent. They can be learned and developed, especially early in life, and further honed throughout an entrepreneur’s career.

The Skills Most Entrepreneurs Lack

Entrepreneurs are a unique group of people, but they behave in patterns. In fact, as I recently wrote here on HBR, my firm’s research shows that most serial entrepreneurs display persuasion, leadership, personal accountability, goal orientation, and interpersonal skills. But in that same study, we also discovered a set of skills they do not possess.

To rehash our methods, we assessed subjects identified as serial entrepreneurs on what personal skills they possessed. Then they were compared to a control group of 17,000. As before, this group was assessed on their mastery of 23 practical, job-related skills. We measured whether skills were well developed, developed, moderately developed, or needed developing.

After analyzing the data, we found four distinct skills lacking in most serial entrepreneurs, three skills statistically significantly and one other also noticeably lacking. The statistical significance is derived by comparing the lowest ranking skills to the entrepreneurs’ top skills, as evaluated in the first study.

Empathy is one of the qualities serial entrepreneurs lack most. Entrepreneurs build things and solve problems for people, but according to this study they do this in hopes of a return on investment. Entrepreneurs may have high empathy on an intellectual level, in that they want to produce a product or service that will help someone. This is often, however, also tied to the entrepreneur receiving a return for their time and effort, which people with high empathy do not generally expect.

Entrepreneurial-minded people are not proficient in managing themselves and their time. In many jobs, managing personal day-to-day tasks might take away from accomplishing larger company goals, which are critical to entrepreneurs. Since entrepreneurs typically have many projects underway at one time, they simply do not have time to micromanage each. Often they need assistance managing everyday tasks and should hire or delegate them to someone who has mastered this skill.

This leads to another skill entrepreneurs lack: planning and organizing. Similar to self-management, if entrepreneurs spent time planning and organizing every task or meeting, they would never get anything else done. Once again, hiring someone to keep their calendar, organize meetings and events, keep the office de-cluttered, and help keep them on schedule can put them at an advantage.

Entrepreneurs also do not excel above the control group when it comes to analytical problem solving. They have high utilitarian motivators (potential future gains, monetary returns, new products or ideas), so their focus is often on making a quick decision. They have a sense of urgency in decision-making, and by nature they do not have time to collect and analyze the data. They see numbers as getting in their way, and they should – everyone who has told them an idea wouldn’t pan out has used data and logic to illustrate that point. For example, Martin Luther King Jr. stated, “I have a dream.” He did not say, “I have a plan and strategy.” Entrepreneurs have the vision, but need to employ people to create an executable strategy and carry it through.

Entrepreneurial-minded individuals possess a distinct set of skills that lead to great leadership and ideas. Perhaps the skills they have not mastered are equally important. With an understanding of those weaknesses, they can compensate for them by surrounding themselves with people who excel in these areas. As a leader, realizing other’s strengths and dovetailing them into your own weaknesses is key to developing a team that will carry out your grand vision and achieve goals.

Want to take our assessments to compare your own skillsets? We’ve launched a new course at Buy Then Build to help those considering acquisition entrepreneurship. You can check it out HERE.

You can read more about how understanding your attitude, aptitude and action is the key to helping you navigate a successful search, how to implement PERMA, and run a personal SWOT on our blog. If you’re ready to take our assessments to compare your own skillsets and advance your search, we’ve launched a new way to do that to help those considering acquisition entrepreneurship. You can check it out HERE.

PrevPreviousHustle With Caution: Capitalizing on Entrepreneurship Through Acquisition
NextWhat Private Equity Can Learn From EntrepreneursNext